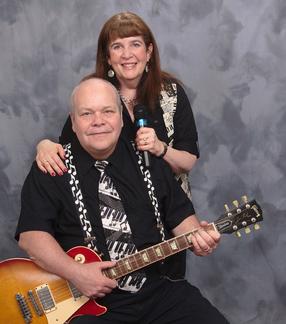 "You brought back so many cherished memories."

Oldies Variety duo Rearview Mirror, Iris Hirsch and Glenn Bullion, plays a blend of rock and roll, R&B, pop, country, standards from the Great American Songbook, disco, and Motown from the 40s, 50s, 60s, 70s, and beyond covering such artists as Elvis Presley, Patsy Cline, Bill Haley, Frank Sinatra, the Drifters, the Shirelles, Stevie Wonder, Bette Midler, Sam Cooke, the Temptations, and Brooks & Dunn. Reasonably priced, Rearview Mirror plays music that appeals to all ages, involves the audience in ways that are fun for everyone, is versatile, experienced, reliable, exciting, and professional. Rich harmonies and a little bit of help from today's music technology give them a full band sound. Special arrangements of the songs they play, incorporating the strengths of this male/female duo make their music unique and perfect for venues from clubs, private parties, large venues, to senior centers and senior facilities.
A Rearview Mirror performance includes not only the music but humor, music trivia, some dancing and fun for all. An audience member once described the duo’s show as “modern vaudeville: music, dancing, costumes and  comedy.”Rearview Mirror’s mission is to involve its audience with the music and to provide a good time for all.
Iris and Glenn are both front members of the Retro-Rockets, a variety/oldies/dance band named as one of the best retro bands in the Baltimore area by CBS Local. These seasoned veteran performers bring with them the music and experience from playing with the band, as well as a wealth of new music arranged specifically for the duo.